It is often what you can’t see that forms the biggest adventure of all. What is beneath us is like nowhere else in the world.  As the volcanoes rocked the earth over 5,000 years ago, lava caves formed, an array of cenotes developed and breathtaking lakes established the limestone foundation of Mount Gambier. This created a region that is truly unique.

Some of the Limestone Coast’s most unforgettable visitor experiences are hidden from sight. Deep below the rich volcanic earth lies a spectacular labyrinth of caves created over thousands of years by the constant slow drip of rainwater filtering through porous limestone. There are approximately 800 caves in the Limestone Coast region, and a cluster of the safest and most spectacular sites are accessible to the public. 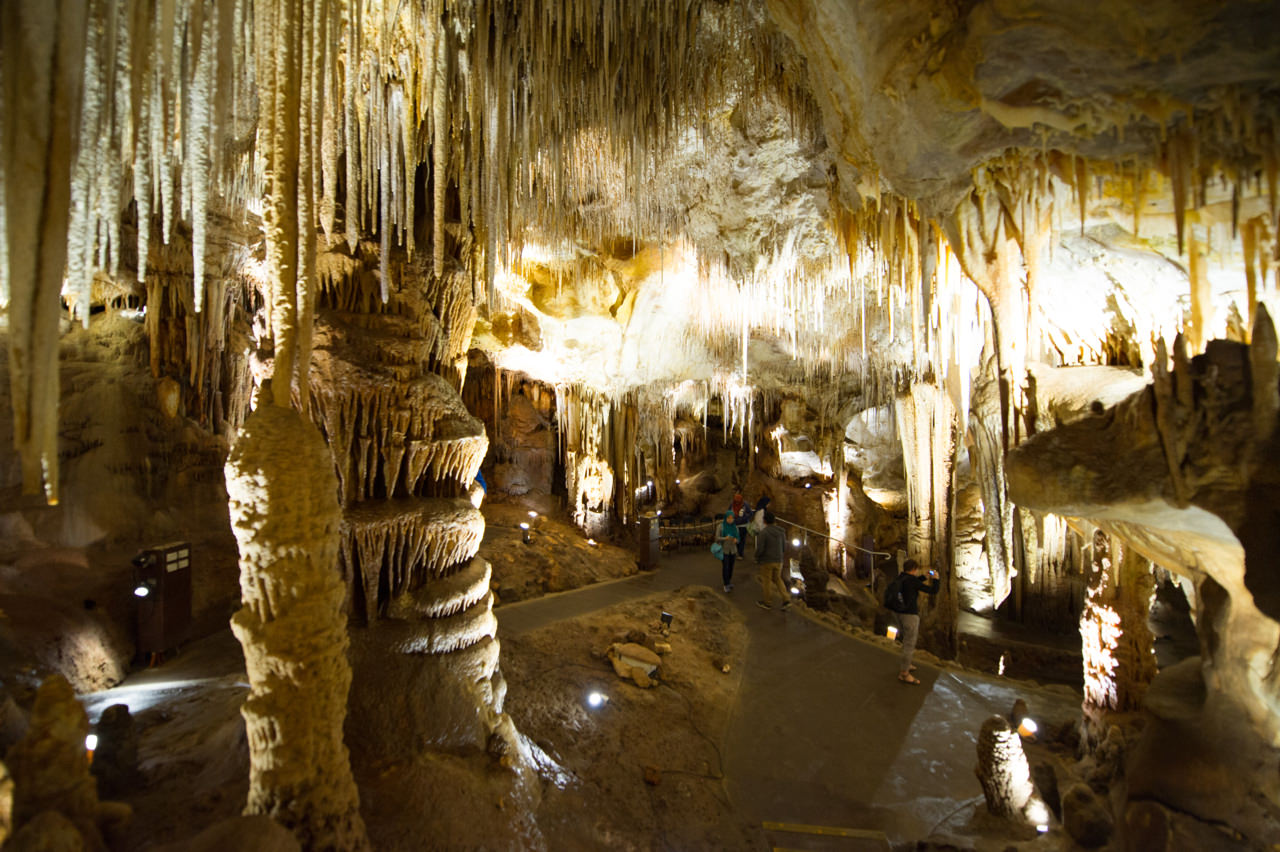 Beneath Mount Gambier’s city streets, experienced divers can explore the secret tunnels of Engelbrecht Cave, carefully weaving their way through an intricate maze of water-filled passages while the world passes by overhead.

From the top it looks like a park, but from beneath it’s a geological wonderland. Be guided on a tour down into the cave and learn about the region’s underground water system and the history of the cave. See where the qualified cave divers explore the secret tunnels and water filled passages.

South Australia’s only World Heritage site is only an hour’s drive north of Mount Gambier. The Naracoorte Caves National Park contains a priceless fossil record of the ancient animals that once roamed the local landscape.

The Wonambi Fossil Centre brings the extinct creatures back to life and demonstrates how the caves acted as pitfall traps, preserving their skeletal remains for up to 500,000 years.

Four caves are open to the public for self-guided, guided and adventure caving tours. The other caves are used for scientific research, with paleontologists still unearthing chapters of our past.

The wheelchair-accessible Tantanoola Caves are set into a cliff face and were once part of an ancient coastline – the evidence lies within, with seal bones and shells among the many fascinating finds.

The ocean’s gradual retreat left behind the cavern filled with spectacular stalactites and stalagmites, and knowledgeable tour guides are on hand to explain how the delicate formations developed.

Take the 500-metre loop hike leading to the top of the cliff for 360-degree views of the surrounding forest land, and enjoy a packed lunch in the pine-scented picnic grounds.

Most limestone caves are formed by water seeping down through cracks and fault lines in the limestone, dissolving the rock and creating fissures and tunnels. The formation of Princess Margaret Rose Cave, however, was assisted by water from the Glenelg River which worked its way along a fault line for approx 500m. Take the guided tours and gain an understanding of the fragility of this natural wonder.

Who’s Up For Some Exploring?

The extensive subterranean network of cenotes located in the south-eastern corner of South Australia lay hidden deep underground for many thousands of years. It took the gradual collapse of cave roofs to expose their secret existence, with remarkable natural forces shining new light on the region’s fascinating past. They now form the ‘must see’ list for visitors to the regions.

In the Mount Gambier and Limestone Coast area it has been said there are over 50 cenotes containing water.

Situated in the centre of the city, the Cave Garden features a unique cenote. Its beauty and significance can be appreciated from the viewing platforms which hang dramatically over the cenote. A bonus in wet weather is the spectacular waterfall.

Every evening a spectacular Evening Light Show tells our Aboriginal Dreamtime stories. Best viewed down in the cave, times vary due to season and daylight savings. Beautiful roses are a stunning feature of the famous Cave Garden, a state heritage area. With its historic garden flowing deep into the cenote, this area is a great meeting place for locals.

The beauty of the Umpherston Sinkhole has to be seen to be believed. Appreciate its size and depth from the viewing platforms at the top of the cenote, then, walk down into the cenote, along the terraces and behind the hanging vines.

Umpherston Sinkhole, also known, as the Sunken Garden was once a cave formed through dissolution of the limestone. The cenote was created when the top of the chamber collapsed downwards. Now the topsoil down on the floor forms the perfect environment for the sunken garden. Originally beautified by James Umpherston around 1886, the cenote is open at all times and from dusk each evening the area comes alive with possums as they venture into the floodlit gardens to feed. The geological processes that have created the cenotes in the region inspired the sculpture at Umpherston.

The resident colony of possums make an appearance at dusk and enjoy being fed fresh fruit (no bread please).

Caroline Sinkhole can be found within Penambol Conservation Park. Sitting above the current water table, the bottom of the cenote is covered with lush green grass and vines hanging from the walls. Only a short walk from the car park, the viewing platform provides a bird’s eye view of the area.

It’s likely that the internal ledges once provided shelter from the elements, with archaeological digs unearthing evidence of early Aboriginal habitation.

According to local legend, the ominously-named Hell’s Hole tucked deep within a forest was discovered long ago by two night-time travellers.

Venture into the pine forests off Glenelg River Road and you will find Hell’s Hole. Take a look down into the cenote from the viewing platform. At first, it may look like deep black water but as you look closer you will start to notice the clarity of the water. If you’re lucky you might be joined by qualified divers emerging from the surface. This mysterious hole is a popular spot for abseiling cave divers.

Permits must be obtained to dive, and a viewing platform offers incredible views for those wishing to stay high and dry.

Serenely located beneath a private rural farming property only 15 minutes from Mount Gambier, Kilsby Sinkhole is world-renowned as one of the best cenote dive sites due to its crystal clear water and breathtaking visibility.

A cave found in the fork of a road at Allendale East is also part of local folklore – legend has it that it opened up and swallowed a horse and cart on a wet night well over a century ago. Divers regularly explore a 35-metre underground tunnel while cars travel unaware overhead.

Mount Gambier is one of few cities in the world to be established on the slopes of a volcano, but visitors needn’t be nervous; the imposing landmark last erupted 5000 years ago. The Blue Lake and Valley Lakes craters formed during the eruption, but according to the Dreamtime stories of the Boandik Aboriginal tribe, they were the work of the giant Craitbul; every time he lit a campfire, it was doused by emerging underground water, leaving gaping holes in the ground.

The free one-hour movie Volcano further unearths the region’s fascinating past along with a short film of the Craitbul story; both screen daily at Mount Gambier’s Main Corner.

The Crater Lakes’ area is less than 10 minutes drive away. Allow time to explore and pack a picnic or plan a barbeque to make the most of the stunning parks with open spaces and glorious surrounds. There are several viewing platforms around the rim of the Blue Lake. The lake is spectacular on chilly winter mornings when it’s draped in mist as the sun rises. 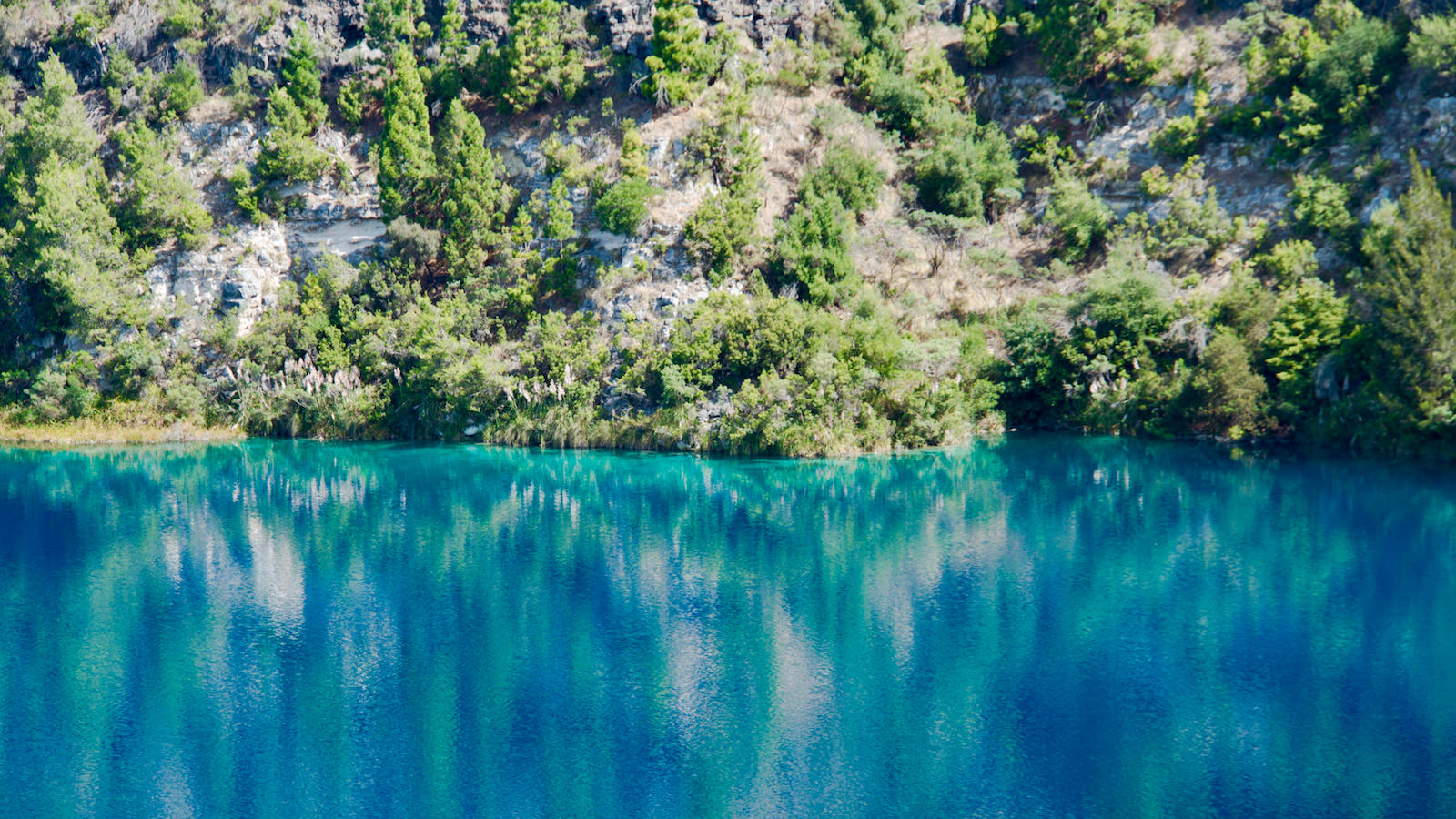 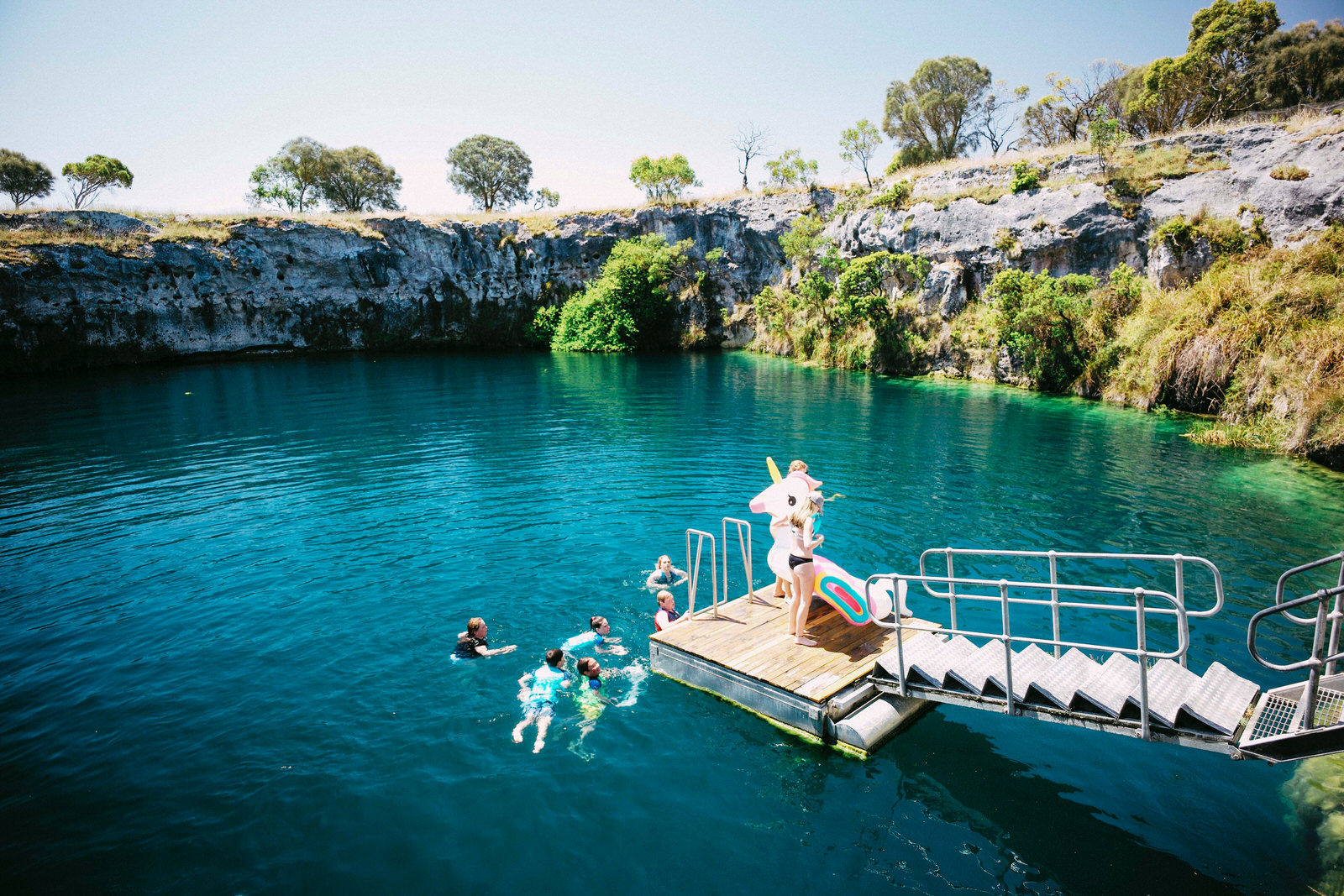 Experts attribute this phenomenon to the presence of microscopic calcite crystals which “scatter” the light entering the lake, and change seasonally. A chemical reaction occurs in early summer when the surface water is warmed, but the deeper water remains cold.

The crystal clear water of the Blue Lake has been filtered through limestone, passing slowly beneath the city and serves as the city’s water supply.

Walk or drive around the rim of the lake, stopping at the many lookouts along the way. At only 3.6km, it is an easy 45 minute walk.

Drive down a volcano crater to the Valley Lakes Recreation Area. While picturesque year-round, the area is majestic in autumn when the flame-like trees put on a spectacular show. Enjoy an array of activities including the free conservation park, nature walks, adventure playground, water sports and disc golf.

Bring a picnic and discover Brownes Lake. This was the site of Mount Gambier’s original botanic gardens and the area is picturesque all year round, but especially in Autumn. You’ll find covered shelters and 16 free gas barbecues within well-kept picnic areas.

This crater is only about 4,600 year old, the youngest crater in the Mount Gambier system. In the late 1800’s this area was the nursery for the then Mount Gambier forest, it was where the first Pinus Radiata was planted which now dominates forestry in South East of South Australia.

Today it is an inviting area at any time of year, with flora and fauna changing with the seasons. Although not a naturally vegetated area it has a wealth of exotic plantings over the years and is the most attractive and accessible park in the area.

An invigorating walk to Centenary Tower offers a birds-eye view of this unique landscape, as you decide where to start exploring the area. On a clear day enjoy breathtaking views of the sand dunes and ocean in the distance.

The Centenary Tower commemorates the naming and discovery of Mount Gambier by Lieutenant James Grant in December 1800. Grant undertook the first eastwards passage along the southern coast of Australia in the HMS Lady Nelson. He sighted and named Gambier’s Mountain (Mount Gambier) from the deck of his ship.

The Little Blue Lake is a popular venue for visitors and locals to enjoy a naturally cool swim in a beautiful natural water filled cenote. Stairs and a floating pontoon, to improve safety and public access to the water’s edge, have been installed via an artificial cutting in the south side of the cliff.

The Little Blue Lake is located in the Kanawinka volcanic area between two dormant volcanoes, Mount Schank and Mount Gambier. The cenote’s name is attributed to the fact that its water used to turn blue in colour on an annual basis similar to Mount Gambier’s Blue Lake, however in more recent times the cenote generally remains green in colour.

The lake has a diameter of about 40 metres, with cliffs approaching a height of about 8 metres above water level and a maximum depth of about 47 metres . The shallowest point is a depth of about 25 metres.

This volcano dominates the skyline south of Mount Gambier, and a 15-minute drive from the Blue Lake city will deliver you to the base of the cone.

Dubbed Australia’s ‘youngest’ volcano despite erupting 4500-5000 years ago, visitors can climb hundreds of steps to enjoy sweeping 360-degree views of the surrounding landscape with its richly textured patchwork of fertile paddocks and the ocean beyond.

A basic trail traces around the top of the crater and descends deep within the dormant landmark.